Discover the gouache Makeup Worries by DODO in our virtual exhibition On the Lightness of Being. Joie de vivre between Belle Époque and Roaring Twenties

Born in Berlin to a comfortably well-off middle-class Jewish family, Dörte Wolff trained as a graphic designer and fashion illustrator at the Kunst- und Gewerbeschule Reimann, a private art school in Berlin, from 1923 to 1926. Working under the pseudonym ‛Dodo’, she began her career making fashion plates for magazines and went on to produce illustrations for ULK, a widely distributed satirical journal to which the artist and illustrator artist Jeanne Mammen and Lyonel Feininger, George Grosz and Rudolf Schlichter also contributed. Between 1927 and 1929 Dodo reached the high point of her artistic career. In this short period, over sixty of her gouaches were published as full-page and double-page illustrations in ULK. They are remarkable for their vivid colour and vibrant draughtsmanship.

In the present gouache titled Makeup Worries Dodo transports the viewer into a barren desert landscape. A number of key elements indicate that the scene is set in Egypt – the pyramids in the background, the camel in the foreground and the sand storm in the middle distance. A dark-skinned desert guide with delicately defined features hands the reins to a young woman mounted side-saddle on the camel’s back. It is evident from her light complexion and elegant style of dress that she is a tourist from Europe. Her mask-like features have a touch of arrogance and display indifference towards the cultural sites of Ancient Egypt. The caption published beneath the drawing in the magazine ULK emphasizes the impression of hauteur and self-absorption that the woman conveys. It reads: “How dreadful, I’ve only enough desert makeup left for my face and tomorrow there’s the beach party by the Nile.” Neither of the stylish young woman’s companions shows sympathy for her superficial worries about her outward appearance. What’s more, her glamorous style of dress is disconcertingly unsuited to a trip into the desert. It is no surprise that her two companions should avert their gaze. The camel’s closed eyes express stoic composure and the guide, in feigned deference, deftly avoids eye contact – luxury problems simply do not arise in Egyptian everyday life. Meanwhile the young woman secretly appraises the young black guide through narrowed almond eyes. Only a few years earlier the African-American dancer and singer Josephine Baker (1906 St. Louis, Missouri – 1975 Paris) had taken Europe by storm with her exotic film and stage performances. She first appeared in Berlin in 1926 performing in La Revue Nègre. With her sultry performances and risqué costumes she earned herself sobriquets such as ‘Black Venus’ and ‘Black Pearl’. Her career rise coincided with a renewal of interest in non-Western forms of art and the emergence of Art Déco. She was celebrated by artists and intellectuals of the 1920s as an iconic image of the Jazz age.

In this gouache caricatural elements interfuse with shots of biting irony. The work is a characteristic example of Dodo’s skilled draughtsmanship and at the same time offers a unique take on the fascination that developed in the 1920s with all things relating to Ancient Egypt. Howard Carter’s discovery of the tomb and treasures of Tutankhamen – nicknamed ‘King Tut’ – in 1922 led to an explosion of ‘Tutmania’. The women of Ancient Egypt were reputed to be connoisseurs of makeup and beauty products. A range of such items were found in Tutankhamen’s tomb, leading to a boom in the industry for womens’ makeup. The appearance of women in Ancient Egyptian art had a formative influence on the classic 1920s glamour look. Ancient Egyptian designs and motifs strongly influenced fashion of the period. When the famous bust of Queen Nefertiti, which had been shipped to Berlin in 1913, was placed on show on the Museumsinsel in 1924 this triggered a revival of interest in the ancient advanced civilizations of Africa. The subject had lain dormant since Napoleon’s military campaigns and went on to find expression in drama, literature and the arts. The fascination for Egyptian themes lasted into the 1930s. Agatha Christie drew on her extensive travels in the Middle East for the novel Death on the Nile. Published in 1937, it remains one of her best-loved and most famous books.

Dodo’s oeuvre was rediscovered in 2012 when exhibitions were staged by the Staatliche Museen in Berlin and at the Ben Uri Gallery and Museum in London. She also featured alongside Otto Dix, George Grosz and other leading ‘Neue Sachlichkeit’ artists in the major exhibition ‘Glanz und Elend in der Weimarer Republik’ [Splendour and Misery in the Weimar Republic] staged at the Schirn Kunsthalle in Frankfurt in 2017-8. Her work has now been shown in six important museum exhibitions and is to be included in forthcoming exhibitions marking the centenary of the Weimar Republic.

The River Fulda near Kassel

The Towers of Notre Dame in Paris 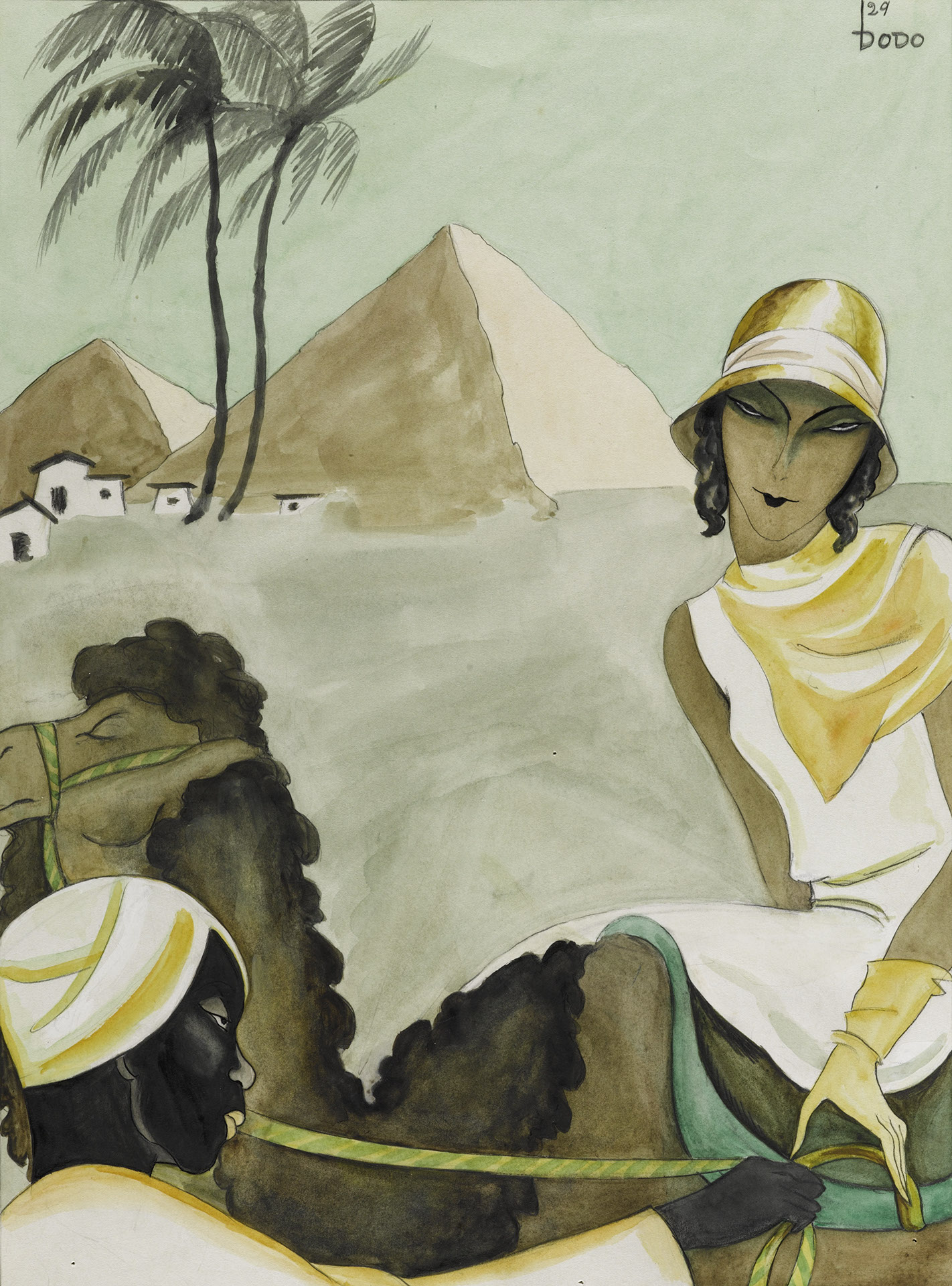