Born in Berlin to a comfortably well-off middle-class Jewish family, Dörte Wolff trained as a graphic designer and fashion illustrator at the Kunst- und Gewerbeschule Reimann, a private art school in Berlin, from 1923 to 1926. Working under the pseudonym ‛Dodo’, she began her career making fashion plates for magazines. She went on to produce illustrations for ULK, a widely distributed satirical journal which published over sixty of her gouaches in the three year-period 1927 to 1929. Published as full-page and double-page illustrations, these drawings mark the high point of her artistic career. They are remarkable for their vivid colour and vibrant draughtsmanship and are emblematic of the lifestyle and aesthetic of the Golden Twenties.

In January 1929, Dodo married Hans Bürgner, a notary some twenty-five years her senior whom she had met and fallen in love with a year earlier. Always unconventional, it was she who took the initiative, rather than wait for Bürgner to propose. The newly-weds spent their honeymoon in St. Moritz, staying at Suvretta House, a luxury hotel where Bürgner was a regular guest. Although Dodo revelled in the indulgence of a sophisticated lifestyle familiar to her from Berlin, she had hoped for more shared time with her husband, who was an avid skier and indefatigable socialite. The situation was not made easier by her lack of enthusiasm for the chilly mountain climate.

Published in ULK in February 1929, the present gouache titled Honeymoon is clearly a reflection on Dodo’s recent stay in the Swiss Alps. An elegantly dressed couple gazes down at a distant valley from the shelter of a covered terrace set against a backdrop of snow-capped peaks. The reddish glow of the sky tinges the mountains with pink and the warm evening light lends the scene a romantic aura. The couple’s posture exudes a sense of closeness and familiarity but their distant look suggests that a shadow already lies over their happiness. The dialogue in the caption serves to heighten this impression. She remarks, not without a certain irony: “Marvellous, this majestic winter landscape. I already feel completely glaciated.” And he replies: “Let’s set off quickly for Egypt, my girl, so you can be unfrozen.” It remains unclear whether this attempt to defuse the situation was intended seriously.

Both compositionally and pictorially, this gouache is a characteristic example of the work Dodo was producing in the late 1920s,. Its autobiographical element lends it a unique note. The tall, pipe-smoking gentleman in the prime of life has the distinctive facial features of Hans Bürgner and the elfin figure with the voguish pageboy haircut is unmistakably recognizable as Dodo. Their detached bearing and the ambiguity of their dialogue seem to signalize two very different perceptions of life as a couple and anticipate the problems that would overshadow their marriage. But it would have been out of character for Dodo not to include a punch line – this is a couple affluent enough to afford a classy holiday in one of Switzerland’s best hotels and a spontaneous trip to the far-off attractions of Egypt. That she could not resist an ironic dig at her husband shows her to be a true free spirit, unconstrained by convention.

Dodo’s oeuvre was rediscovered in 2012 when exhibitions were staged by the Staatliche Museen in Berlin and at the Ben Uri Gallery and Museum in London. She also featured alongside Otto Dix, George Grosz and other leading ‘Neue Sachlichkeit’ artists in the major exhibition ‘Glanz und Elend in der Weimarer Republik’ [Splendour and Misery in the Weimar Republic] staged at the Schirn Kunsthalle in Frankfurt in 2017-8. 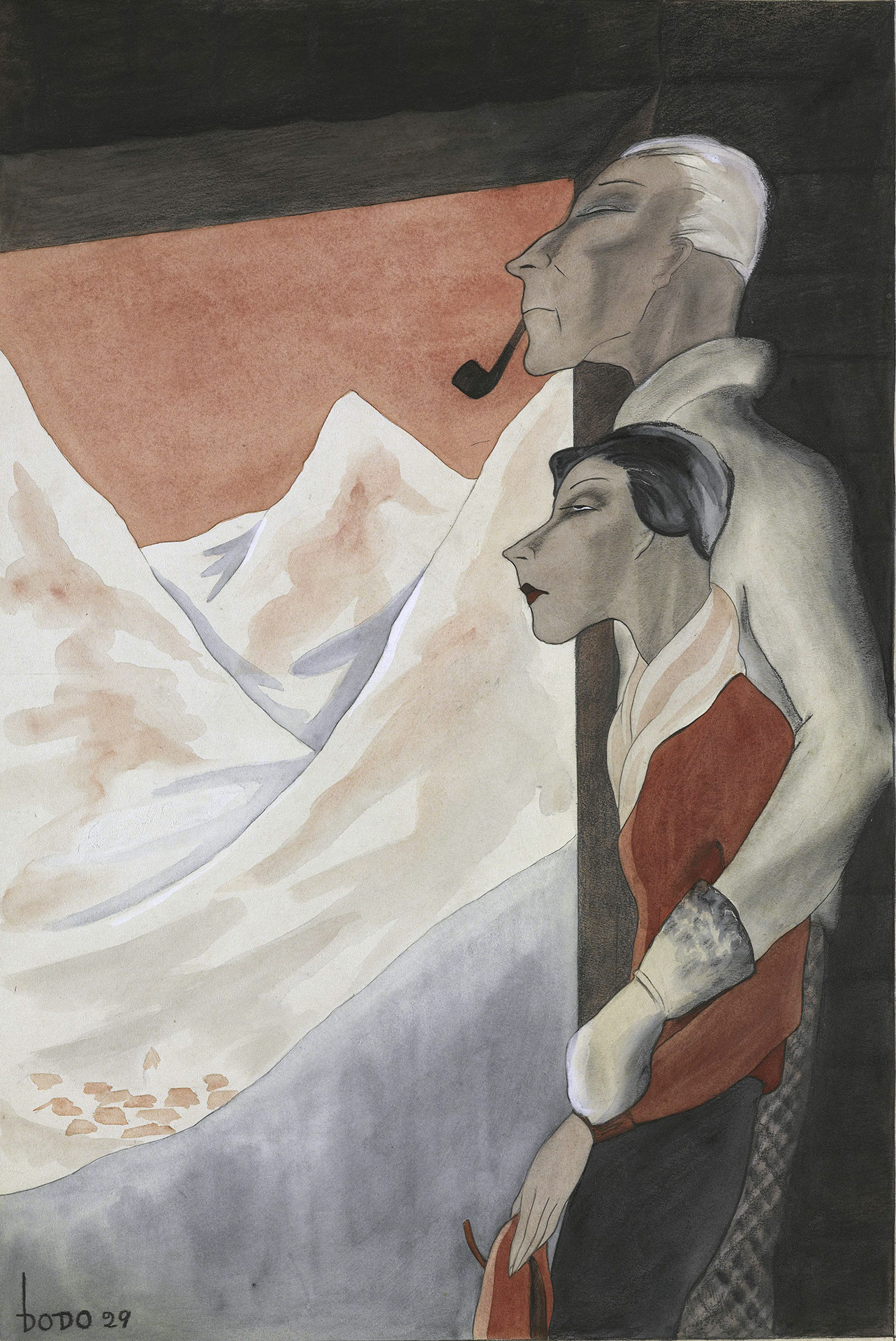