The 1840s saw Adolph von Menzel’s work undergo a transition and a period of artistic experimentation. His extraordinarily multifaceted output included works such as the illustrations for The History of Frederick the Great (1840-2) – a series that brought him broad recognition and prefigured his celebrated cycle of history paintings illustrating the life and achievements of Frederick the Great. But it also embraced more informal pieces – private interiors such as The Balcony Room (1845, Nationalgalerie Berlin), subjects motivated by his interest in burgeoning urbanisation, as in the painting Building Site with Willows (1846, Nationalgalerie Berlin), and landscape motifs, for example Thunderstorm over Tempelhof Hill (1846, Wallraf-Richartz-Museum in Cologne). The body of around one hundred drawings which he made on a visit to Kassel and the surrounding area in the years 1847-8 may also be seen in this context.

In 1847, the Kurhessischer Kunstverein awarded him a commission for a history painting depicting an episode from the history of the Land of Hesse. He spent seven months – from early August 1847 to late March 1848 – in Kassel working on what would be known as the Kasseler Karton (Kassel Cartoon). He regularly interrupted painting sessions to explore the town and rambled in the environs of Kassel, tirelessly recording his impressions in his sketchbooks. Many of the sketches he produced are today ranked by experts as among his finest. One of the most remarkable sheets in the group is the present view. Made in 1848, it depicts the river and the Orangerie seen from the Fulda Roundel.

Menzel has chosen a raised viewpoint looking south-west across the river Fulda. The triangular area of shading in the foreground represents the massive enclosure wall of the Roundel seen at close range. The Roundel is all that survives of the ramparts of the former Landgraves’ Castle which was destroyed in 1811. Menzel had already chosen the Roundel as his viewpoint a year earlier for a sketch looking in the opposite direction titled River Fulda near Kassel (1847, Nationalgalerie Berlin) in almost identical format. Appearing on the river just beyond the wall is a barge which two boatmen are slowly steering towards a side arm of the river. In the background is the Karlsaue, an extensive baroque park bordered by bare poplars and plane trees partly obscuring the lightly sketched outline of the Orangerie. On the opposite bank scattered buildings are glimpsed through the trees. The eye is led from here towards a delicately defined background of hills. The chilly haze of a winter’s day hangs over the horizon.

Why is it that some critics have described Menzel’s Kassel drawings as ‘lustrous pearls and ‘superlative masterpieces’ and others have spoken of them as ‘his finest achievement’? It is Menzel’s avoidance of a decorative or veduta-like style of representation that distinguishes his landscape drawings from those of most of his contemporaries. In the present sheet he takes pleasure in observing nature for its own sake. He employs remarkable economy of means and great subtlety in his depiction of its transient effects – the sombre mood of a bitterly cold day, the sluggish motion of a large body of water, light penetrating a filigree network of bare branches. Complex reality is pared down to its essentials. The fragmental conception of the composition, the choice of an unusual vantage point and the perplexing foreground motif attest to his astonishing powers of invention. The immediacy of the image gives it a powerful sense of authenticity and engages the viewer in the visual experience. Although the unconventional character of Menzel’s drawings sometimes makes them seem unpolished their virtuosity never fails to fascinate and their timelessness is unchallenged.

The Towers of the Munich Frauenkirche 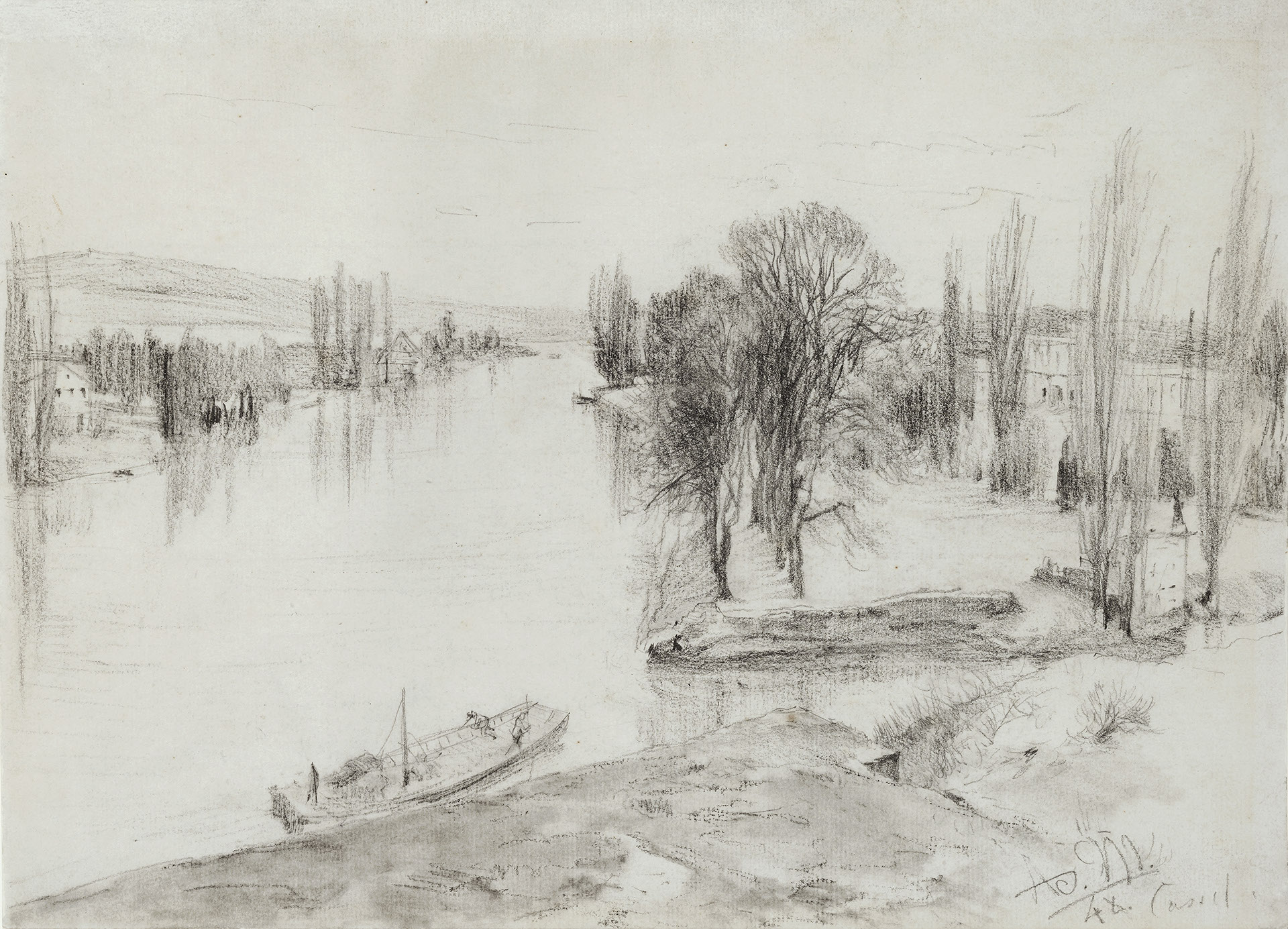